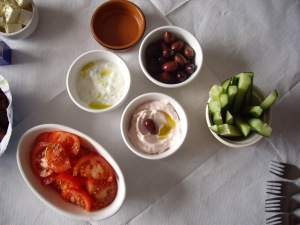 As a child, when I went to a friend’s house “for tea”, I was never given stuffed peppers, pastitsio, stifado or any other dish that my mum would spend hours preparing.  I was well aware that mum had special cooking powers that she had acquired whilst in Crete and that other mums (poor souls) had access only to their native cuisine.  Therefore, I did not expect anything more than pizza and chips or fish fingers and chips or something similar (with chips).  What interested me, even as a youngster, was the reaction of my peers to some of the meals that I’d grown up on.  Let’s just say that not all children are as open-minded as one would hope.

In the global society that we inhabit today, children are exposed to a variety of different cuisines, sadly many of them will be in some form of take away.  I say sadly because it’s unlikely that the majority of children that eat food from different cultures will be enjoying an authentic experience that truly represents the country of origin.  However, it’s certainly encouraging to see children eating new and diverse food.  Children tend to pick up on the types of food eaten in different countries and often use this as a way to identify those places.  Food associations can be very strong.

Last year I invited friends and family round for a Greek night.  It was a chance for me to cook some of the food that I loved and to share it.  I was most surprised about the perceptions of Greek food that people had and how little people knew about it.  In that respect, the night was a success because lots of people were able to widen their experience of Greek cuisine beyond, the almost ubiquitous, moussaka.  This week, some friends came round for meze- small portions of (Greek) food traditionally served with drinks.  I was excited about seeing them and not least because they had requested some Greek food.  No fish fingers then.

I’d like to share two of the recipes from the meze that I think are fun to make and really tasty.  The first is a vegetarian snack that could be easily adapted for other vegetables and ingredients.

Begin by making the batter.  Throw all of the dry ingredients into a medium-sized bowl and then add the eggs and water whisking constantly.  The more air you get into the batter, the lighter the fritters will be.  I used to make these with just a little water added, but after spotting Annabel Langbein‘s addition of soda water, I’ve not looked back!

Grate the courgettes into a bowl lined with either a tea towel or kitchen paper.  Lift the courgettes out and squeeze as much water out as you can.  Discard the water and mix the grated courgettes into the batter with lots of chopped fresh mint, plenty of beautiful black pepper and salt to taste.  Finally, crumble the feta into the batter and gently stir it.  Don’t break the feta up too much or it’ll be lost in the mix.  It’s nice to get little chunks of feta throughout the fritters.
Heat a frying pan and drizzle a little circle of olive oil around it.  When hot enough, drop spoonfuls of the batter onto the oil at intervals.  When the underneath is golden, flip the fritters over.  It’s possible to dry fry these in a non-stick pan, but the fritters will look pale and wan.  Place the fritters on a plate with some kitchen paper to soak up excess oil.  To be honest, the fritters retain most of the oil and are not greasy to touch.  I like to sprinkle sea salt over them when they are first cooked and they’re great with tzatziki.  The batter mix is a winner and works really well with a host of different vegetables.  It’s very versatile and perfect for summer!  Enjoy. 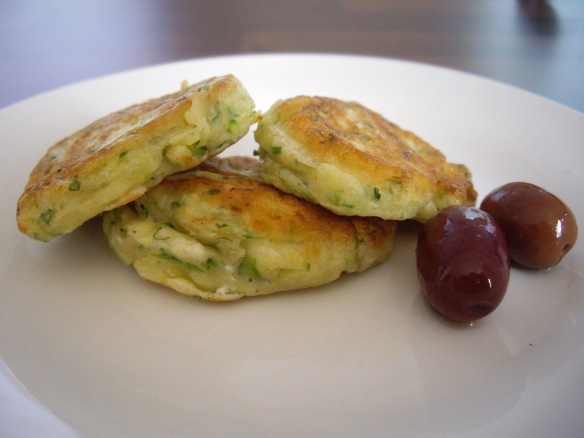