I guess it depends on what you want from food as to whether or not you rate a recipe highly.  In terms of carrot cake, and perhaps cake in general, people seem to respond well to high levels of moisture.  If a cake is dry and mealy, it is deemed a failure.  Shop bought cakes tend to be dry if they have been on the shelf for some time.  The addition of other ingredients to retain that all-important quality are not always welcome.  For those wishing to bake their own cakes, it’s always important to make sure that there is a good texture without sacrificing the structure of the cake itself.  Nobody wants a pile of crumbs, no matter how much sugar is in there.

What I’ve found with recipes that have ‘moist’ in the title or include an introduction that champions the moisture content, is that they often contain an amount of sour cream, creme fraiche or even buttermilk.  Indeed, there are plenty of good brownie recipes that include a good dollop of sour cream.  The carrot cake recipe that I tried last night is no exception.  However, sour cream and creme fraiche were missing from my fridge when the carrot cake urge took me.  I had to think on my feet.  The results were interesting.  Well, that is if you find the outcome of baking a carrot cake interesting. 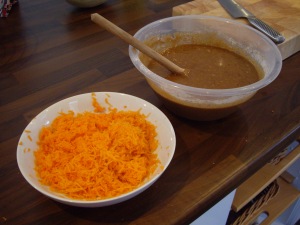 Grated carrots ready to go into the batter.

Plenty of nutmeg, cinnamon and even desiccated coconut went into this version.  I added some lavender water after steeping a fresh lavender bud in boiling water for 10 minutes.  It was a nice background flavour, but I don’t think it’s easy to detect.  The lack of creme fraiche didn’t cause too much of a problem.  I didn’t want to leave out that element since it would provide a lot of the softness in the texture of the cake.  I had some Greek style yoghurt in the fridge and put in a couple of table spoons to substitute.  Don’t laugh!  It was coconut flavour so I figured I could get away with it.  The gamble paid off.  The cake cooled and revealed itself to be extremely moist.  Any more, and the cake would be too delicate to cut and serve.  The topping for the cake was a last-minute throw together.  The original recipe called for mascarpone, but again, I didn’t have it in.  Philadelphia to the rescue.  A table-spoon mixed with plenty of double cream and icing sugar did the trick.  I finished it off with cinnamon and some grated lemon zest.  Not too shabby.  I was very pleased with it. 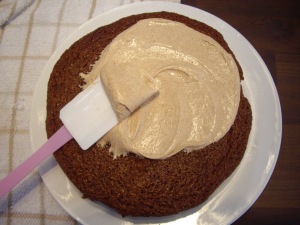 The last minute topping did the trick. I'm not entirely convinced that I can close the case on the search for the perfect carrot cake. This one is certainly soft, moist and full of flavours. I'm going to keep experimenting until I hit the jackpot. This one was very close indeed. I'll put the recipe up soon and see what you think of it. Greedy slice. 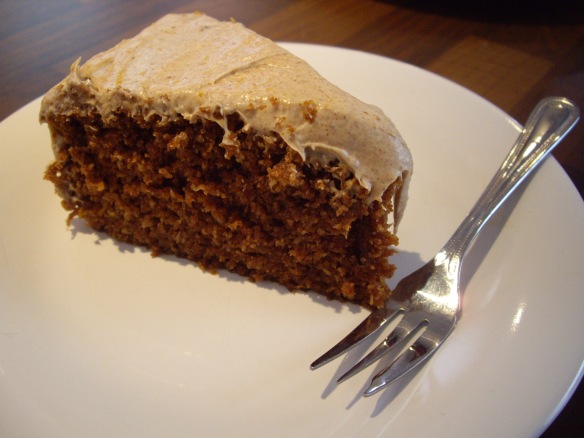 This came close to being perfect.

3 thoughts on “Outlandish claims of moisture.”