I’ll hold my hands up now and declare that it’s true.  I wrote at length about carrot cake.  Heck, I even baked a few!  One thing’s for sure, the recipe for this most comforting of cakes has yet to make an appearance on the blog.  “A travesty!”,  I hear you cry.  Yes, I’m aware that it is listed in the recipe drop-down menu.  “What other crimes against cakes have you committed?”, I hear you demand.  Let’s all just get a grip here.  We’re talking about cake.  A good cake, but a cake none-the-less. 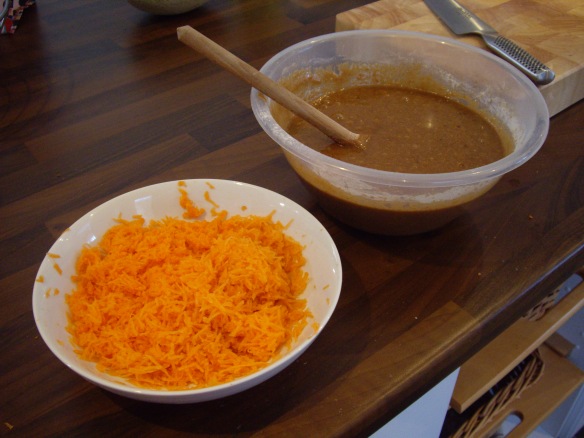 Before you start throwing cinnamon in my eyes and prodding me with a wooden spoon, let me just say that the following recipe is one that has taken a long time to perfect and I’m very proud of it.  Don’t go printing it off for any old chap in the street, or one of those friends that you accepted as a friend online, but if you saw them in the street you’d dive into a shop before they saw you.  You know the ones I’m talking about.  This is a recipe that I believe will lead you to a slice of something rather special.  It’s our little secret that we can smugly keep to ourselves while basking in the praise from those lucky enough to eat it.  Okay, okay..give it to whoever you like!  The world needs good cake.

It’ll be September soon and my French father-in-law will be making his way across the water with a suitcase full of saucisson and Cotes Du Rhone.  It was on his last visit that I had to explain what carrot cake was, all the time watching him scrutinise my every facial expression for some grain of dishonesty.  He was convinced I was pulling his leg.  “But you say that the carrot is in the cake?”  He just couldn’t understand how this could be and he was even more surprised when I explained that it was not savoury.  It wasn’t until he sampled a slice, and then a second, and then another that I saw he was convinced, converted and content.  “This is a good one”, he said, “Who could believe that the carrot is inside it? Perfect!”

Begin by beating the eggs, vanilla, oil and all of the sugar in a medium-sized bowl.  Next, add the flour, cinnamon, nutmeg, bicarbonate of soda and salt to the bowl and give it a good stir.  I usually add the Greek yoghurt next and stir it in.  Finally, stir in all of the grated carrots.

Pour the cake mixture into a 20cm cake tin and bake in the oven at 150 degrees Celsius for about an hour and a half.  It’s best to check the cake by sliding a knife into the centre.  You’ll know it’s done when the knife comes out clean.  Leave the cake to cool before trying to remove it from the tin.

For the icing, just give all of the ingredients a whisk and spread over the cooled cake.  You can grate extra lemon zest onto the cake or even add some curls of zest for decoration.  To be honest, this cake rarely lasts long enough to warrant careful decoration!

PS  I usually make this cake in a shallow sandwich tin and use the rest of the cake batter to fill a loaf tin.  I bake them both at the same time, but I put the loaf out of sight and eat it when nobody is looking.  A little carrot cake loaf is so much easier to hide!

I guess it depends on what you want from food as to whether or not you rate a recipe highly.  In terms of carrot cake, and perhaps cake in general, people seem to respond well to high levels of moisture.  If a cake is dry and mealy, it is deemed a failure.  Shop bought cakes tend to be dry if they have been on the shelf for some time.  The addition of other ingredients to retain that all-important quality are not always welcome.  For those wishing to bake their own cakes, it’s always important to make sure that there is a good texture without sacrificing the structure of the cake itself.  Nobody wants a pile of crumbs, no matter how much sugar is in there.

What I’ve found with recipes that have ‘moist’ in the title or include an introduction that champions the moisture content, is that they often contain an amount of sour cream, creme fraiche or even buttermilk.  Indeed, there are plenty of good brownie recipes that include a good dollop of sour cream.  The carrot cake recipe that I tried last night is no exception.  However, sour cream and creme fraiche were missing from my fridge when the carrot cake urge took me.  I had to think on my feet.  The results were interesting.  Well, that is if you find the outcome of baking a carrot cake interesting.

Grated carrots ready to go into the batter.

Plenty of nutmeg, cinnamon and even desiccated coconut went into this version.  I added some lavender water after steeping a fresh lavender bud in boiling water for 10 minutes.  It was a nice background flavour, but I don’t think it’s easy to detect.  The lack of creme fraiche didn’t cause too much of a problem.  I didn’t want to leave out that element since it would provide a lot of the softness in the texture of the cake.  I had some Greek style yoghurt in the fridge and put in a couple of table spoons to substitute.  Don’t laugh!  It was coconut flavour so I figured I could get away with it.  The gamble paid off.  The cake cooled and revealed itself to be extremely moist.  Any more, and the cake would be too delicate to cut and serve.  The topping for the cake was a last-minute throw together.  The original recipe called for mascarpone, but again, I didn’t have it in.  Philadelphia to the rescue.  A table-spoon mixed with plenty of double cream and icing sugar did the trick.  I finished it off with cinnamon and some grated lemon zest.  Not too shabby.  I was very pleased with it.

The last minute topping did the trick. I'm not entirely convinced that I can close the case on the search for the perfect carrot cake. This one is certainly soft, moist and full of flavours. I'm going to keep experimenting until I hit the jackpot. This one was very close indeed. I'll put the recipe up soon and see what you think of it. Greedy slice.

This came close to being perfect.