My brother is far away in the sun and I can’t help feeling that I’ve lived this moment before; rain is driving against my windows and I’m about to blog in an effort to bring warmth and sunlight into my day.  I’ll count my blessings and give thanks that I’m not a Cretan fisherman.  Now those boys see some weather.

Granted, I’ve been trapped in a snow drift, roasted alive on an airless train through the mountains, drenched in tropical downpours and even caught in a thunderstorm on a boat heading down the Mekong.  However, if you’ve made a living on the sea surrounding the beautiful Greek islands, it’s a good bet you’ll have some stories to tell.  There’s a romantic image of the Cretan people battling the landscape and the elements and at the same time living with and becoming part of them.  We’re a people known for our passion, yes, but also for a stoicism rarely seen in the pampered generations that have come to the fore in the late 20th Century.  Could I brave everything that nature threw at these determined men?  Not a chance.  I’ve spent too long drinking chocolate milk, sitting close to radiators and hailing cabs.

I may have been born in Crete, but my father (a baker) would be surprised to hear me expressing a desire to fish the waters around our homeland.  Less surprising is my love of Cretan fish soup.  As with a lot of the simple dishes of Greece, it has remained unchanged for centuries and was borne of necessity.  Fisherman would cook this beautiful soup on their boats using only tomatoes, onions and some of their catch.  The long, slow cooking would disolve the tiny bones of smaller fish and produce a thick and hearty soup to warm the men at sea.  It’s a soup that has warmed my bones this very evening as our house has done all the stoic withstanding of the elements normally reserved for the wisened face of a Cretan fisherman.  Perhaps it will comfort you too.

This recipe will make enough for two large bowls.  You can use any fish for this soup.  I used some salmon, smoked haddock and a some cod.  Remove as many of the bones as you can before you begin and cut the fish into little chunks.

Cover the fish with boiling water and simmer for about fifteen to twenty minutes.  Skim any foam off the surface and then add the tomatoes, onions and carrots.  Cover and cook gently on a low heat for two or three hours.  After the first hour, you may want to add fish stock.  I find that the liquid reduces and that topping it up with fish stock is a great way of seasoning the soup.  It’s unlikely that you’ll need to add salt, but taste the soup after two hours and season if necessary.

You’ll end up with a very rich, red soup full of soft carrots and fish that has become a part of the broth.  It’s best served with big chunks of fluffy bread so that you can soak up the olive oil.

This is the soup in it’s simplest form.  My mum makes an awesome fish soup that includes rice to bulk it up.  You could add herbs to this soup and a squeeze of lemon to freshen it up, but I love how wonderful the soup is with so few ingredients.  To me, it’s alchemy. 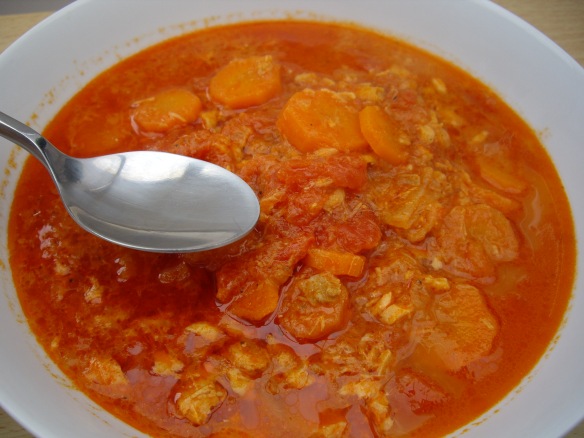