Today I had one of those moments when everything was perfect and I didn’t want time to move forward.  Curse you Father Time!  Have you ever been eating something that was so good that you stopped eating for a moment to take it all in?  The taste, the texture, the aroma?  Everything being just the way you want it and sadly coming closer to ending with every bite?  What else can you do, but continue eating and be thankful for the pleasure?  Boy, oh boy, was I a silent and contented eater.  I felt like Johnny Depp in that film where he eats the best puerco pibil he’s ever tasted and shoots the chef when he’s finished because “it’s just too good.”  Relax, no food bloggers were harmed in the making of this dish.  Ah, the dish… 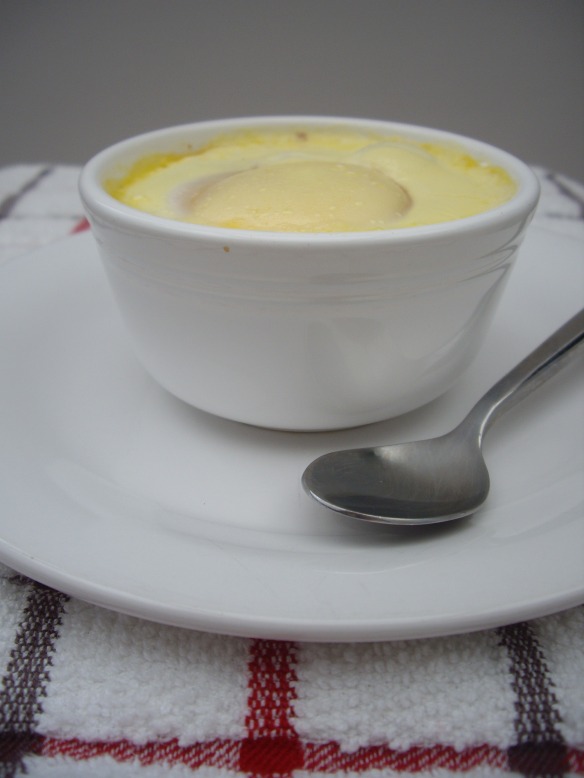 A few years ago, I happened to catch a bit of a Gary Rhodes programme that was showing seasonal recipes.  If you’ve ever watched Gary Rhodes cook, you’ll know that he’s a perfectly nice chap with reliable recipes.  He also tends to be quite linear in his approach to food.  Let’s just say that Gary probably considers wearing odd socks to be a rebellious act.  Despite this, I was captivated by his recipe that day.  I immediately took to the kitchen to prepare my own take on what I considered to be a very promising little dish.

Me and N were hooked after that.  I made the dish regularly and tried different ingredients for fun and variety.  It’s been almost three years since I made it, but this week, I bought some duck eggs and my thoughts turned to the recipe I’d fallen in love with three winters ago.  It was time to make ducky egg pots.

First of all, you need some ramekins.  This recipe will comfortably make four servings, so you need four ramekins.  Preheat the oven to 200 degrees Celsius and have your ramekins ready to fill.

Fry the sliced leek in butter on a medium heat until softened, but not browned.  Season the leeks to taste.  Set aside to cool slightly.  Next, pour just enough of the cream into each ramekin to cover the bottom.  Tear up the ham into little pieces and divide between each ramekin (one slice of ham per portion).  Divide the leek between the pots after that.

Press plenty of grated cheese on top of the leeks leaving at least a centimetre at the top of the ramekin for the egg to be poured in.  I like to grind some black pepper onto the cheese before cracking the egg onto it.  If you press the centre of the cheese down to make a little dent, the yolk will sit nicely in the middle.  (It’s doesn’t affect the cooking, but it’s pleasing to the eye).

So, without further ado, crack your duck egg into the centre.  Finally, pour some cream over each egg until it reaches the edge of the ramekin.  The cream forms a barrier over the egg to stop it cooking too quickly.

Place on a foil-covered baking tray and slide into the centre of the oven for about fifteen minutes.  My fan oven cooks the egg pots quite quickly, so I check on them every few minutes.  The top should be bubbling away and the yolk and white cooked through.  Test one if you’re unsure, by gently digging a teaspoon into the white.  Don’t worry of some of the cream bubbles over the top.

It’s okay to let the egg pots cool for a couple of minutes before serving.  The content will be gooey and hot.  The delight that you’ll get from digging through the creamy layers and letting the yolk and cheese ooze onto the leeks is immense.  The salty ham seasons the cream in the bottom of the pot and in return, the cream stops the ham drying out.  Everything becomes one indulgent dairy dance.

Yes you can dunk bread into them.  Yes you can be playful and make buttered soldiers for them.  Goodness, you could even mix it up with Chorizo in the bottom instead of ham and parmesan or your favourite cheese instead of Cheddar.  Truth is, this is my favourite incarnation of the dish.  I prefer it with duck eggs because of the rich flavour that you get from them, but eggs from hens work well too.

It’s taken a lot for me to share this recipe with you.  I have to admit that I thought about holding out on you, but I just couldn’t, dear reader.  These little ducky egg pots are just too good.  All I ask is that if you decide to try them, and you too have that perfect moment, you won’t come looking for me!