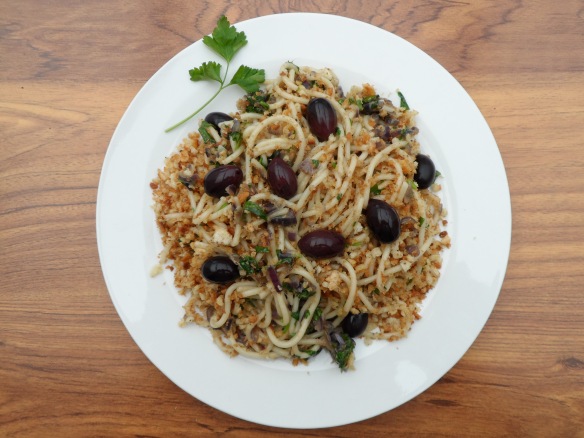 Basking in sunshine, Cannes attracts the wealthy and the vain in their thousands each year.  Through the air wafts a heady mix of Chanel and arrogance that almost masks the aroma of fresh bread from boulangeries that line the busy roads.

Between the Hermes-clad stick figures and noisy Ferrari’s, a small family make their way to see a proud grandfather and share some bread and grilled sardines on his balcony.  It’s the simple things that bring the most joy.

My father-in-law grew up in Cannes and still lives there, swimming each day and grabbing bargains from the fish monger.  Cannes isn’t the friendliest place I’ve visited, in fact, the summer heat is matched only by the frosty reception from the bourgeois beach crowd and the crinkly old coffin-dodgers.  However, there’s some good food to be had! 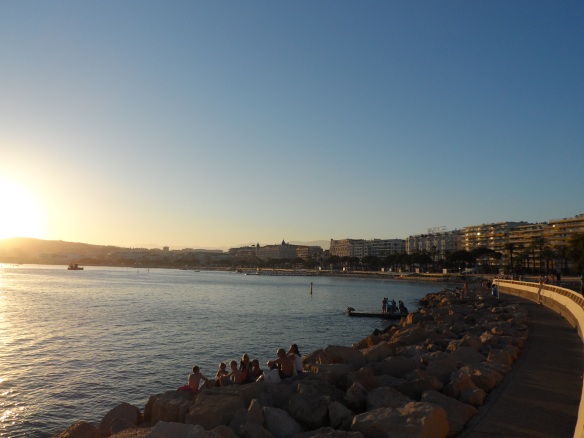 My father-in-law likes to swim in the morning and then return home for a big lunch just as the midday heat is peaking.  Freshly grilled sardines, saucisson, salad, merguez sausages, paella, steak hache, olives, roasted peppers, cheese and of course, baguette.

Just round the corner was a beautiful little boulangerie and patisserie that makes the most delightful baguette.  Crispy, light and fluffy inside.  Parfait!  I became very fond of their bread and brought some home with me.  Traditional French bread recipes do not use preservatives, so baguette should be eaten on the day it is baked.  I had some left over and couldn’t bear to throw it away.  The following recipe is a great way to use up any stale bread and I’m sure that bread lovers will agree with my decision to find a use for the spare baguette. 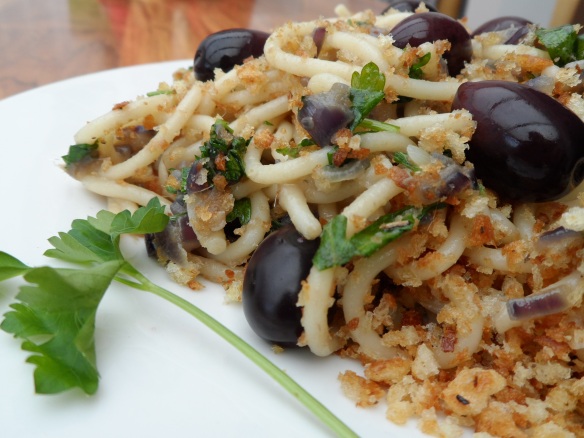 half a red onion (chopped)

This recipe is for one serving, but a quick glance at the ingredient list and you’ll see how easy it is to make this for more people.

I made bread crumbs by blitzing the baguette in a food processor.  I then heated a little olive oil in a small pan and fried the crumbs with the oregano until they were a deep brown colour, but not burned.  I put these to one side.

Meanwhile, I began cooking the spaghetti in boiling salted water.  Some people recommend adding a drop of olive oil to the water, but this is completely unnecessary as long as you give the pasta a stir to stop it from sticking.

Next, I heated the garlic and onion in olive oil until cooked and then added the anchovies.  I broke the anchovies up into the onion and cooked them for a further minute or so.  I stirred in the parsley and the mixture was finished.  The anchovies are salty, so I didn’t need to season the mixture.

I drained the spaghetti, added it to the anchovy and onion mixture and tossed it to make sure that the spaghetti strands were coated.  Finally, I added the bread crumbs and ground a little black pepper over the pasta.  I added whole Kalamata olives at the end, but you could use any olives that you like.  My wife suggested adding squid to this dish which is a great idea.  Maybe next time I’ll use a variety of seafood and a little squeeze of lemon. 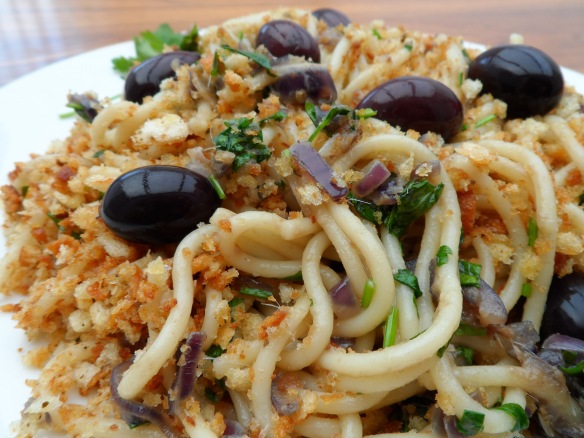