Summer is here again, though not for my good friends in Melbourne.  As the ice begins to cover my friend’s truck, sun bakes the ground dry around my olive tree and feeds my mint until it is waist high!  Regardless of the weather, there’s always an opportunity to share a good peanut butter recipe and tempt you back into the kitchen. 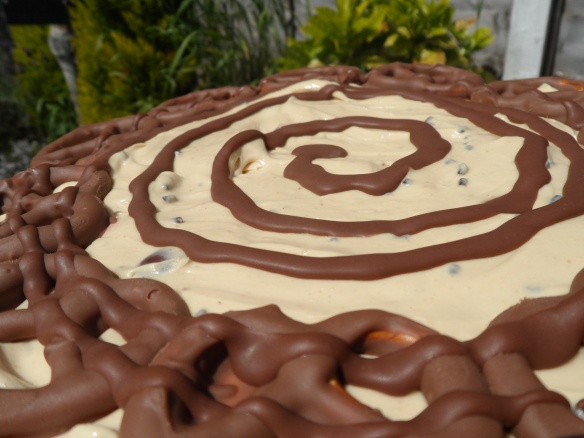 I don’t need to dress this bad boy up at all.  It is quite simply a combination of a no-bake cheesecake recipe and the salty goodness of peanut butter.  I spent quite a while getting this just right, so my hope is that you try it and love it as much as I did.  The recipe below makes a rather large cheesecake; plenty for all the family.  Rain or shine, it won’t last long at all! 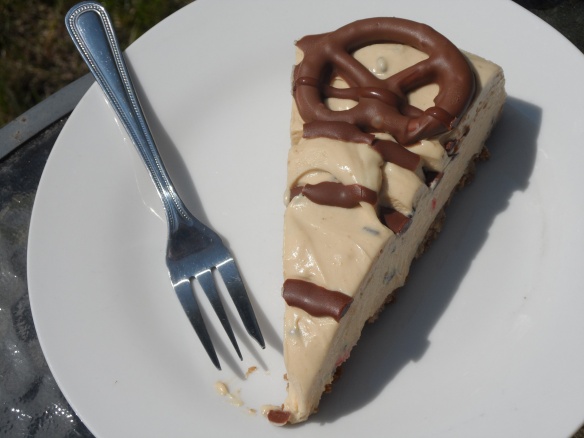 I began by crushing all of the biscuits and putting them into a mixing bowl.  I melted the butter and poured it in.  After mixing the biscuits and butter together, I tipped the mixture into a 9 inch springform cake tin and pressed it down to form the base of the cheesecake.  This went into the freezer for about half an hour to firm up.

For the cheesecake mixture, I used an electric mixer to whip the double cream until peaks formed.  I then added the cream cheese, sugar and peanut butter and continued to mix until fully combined.

At this point, I threw in the sprinkles and Reece’s Pieces.  These are optional, but fun.  I spread this mixture over the biscuit base and popped the cake back in the freezer to make it firm before decorating it.

Once the cheesecake was firm to the touch, I placed chocolate covered pretzels around the edges to make it easy to portion out when serving.  I also drizzled some chocolate and peanut butter sauce to give it yet more peanut butter beauty!  No half measures here.  Now if that isn’t a fun cheese cake, I don’t know what is!