Being married to a greedy chap with a food obsession is frustrating at times, I’m sure.  There’s moaning when meals are dull, there’s a constant stream of food-related chat, large amounts of hard-earned pennies are spent on what seem to be random or unnecessary ingredients and every now and again, a meal is served that the hip kids would label as an “epic fail”.

Don’t get the violins out just yet.  N is a big fan of white chocolate and has the odd day where she completely lucks out.  There are actually two days when this happens.  One is white chocolate cheesecake day.  The other, is blondie day.  Today, it was definitely a blondie day.

Blondies are an alternative to brownies and while I don’t wish to give the impression that I would ever get tired of eating brownies, I do want to promote some thinking outside of that rich, chocolatey box.  I first came across this recipe a few years ago when I was going through what can only be described as a baking frenzy.  Having lived in Hong Kong for a couple of years without an oven, it was a total joy to be back in a kitchen that had more than a microwave and a wok burner.  The baking that followed is almost a blur to me now, but one thing has remained a part of our household since then.  My blondie recipe.  It’s so easy to make that I could burst out laughing just thinking about it.  It requires only two things of you.  The first is that you like white chocolate.  The second is that you like peanut butter.

If you’re gonna bother making something that relies heavily on two ingredients, it’s worth making sure that those ingredients are well represented.  I’ve adapted this recipe so that every piece and every bite is packed full of fun.  Let’s just say that I’ve cranked up the volume.  For me, there’s no such thing as too sweet.  I used crunchy peanut butter because it gives the blondies extra texture, but the recipe works fine with smooth.

Cream the peanut butter and butter together in a bowl.  In another bowl, combine the sugar, vanilla and egg.  Add this to the peanut butter mixture and stir.  Finally add the flour and baking powder.  It’s a good idea to use your hands to squeeze everything together and form a dough.  When you’ve got a dough, you can mix in the white chocolate.  My mum hates white chocolate, so at this point she would add something else.  Come to think of it, I don’t think she likes peanut butter either.  Hmmm… anyway, once you have a ball of stickiness, you’re ready to transfer it to a baking tray.

Don’t be alarmed.  The dough is not the sort that you can roll out and work with.  The best thing to do is to line a little tray with baking paper and then press the dough onto it.  I begin by putting the dough in the middle and using my palms to flatten and push the dough to the edges.  I use a tray with one inch sides because the blondies will rise during baking.  Upon finishing this stage of the recipe, I guarantee you’ll be full of doubt, but fear not.  Into the middle shelf of the oven at 160 degrees Celsius for about twenty minutes and you’re laughing. 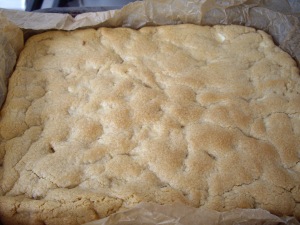 Just golden, but not brown.

The blondies will puff up and turn ever so slightly golden.  Don’t allow them to brown.  The blondies will still be very soft when you take them out.  The hardest part is waiting for them to cool.  If you try to lift them out (and I have), they’ll break up.  If you try to cut them (and I have), they’ll be a mush.  If you prod them with your finger (and I have), well hey, it’s your finger, do what you like.  Once they are completely cool, they will have a wonderful soft, chewy texture and will hold their shape after being cut into little squares.  If your loved ones like white chocolate as much as my wife, you’ll earn major brownie points- or should that be blondie points?  Sorry, couldn’t resist.