It’s funny what you can end up cooking when you’re looking for inspiration.  What began as a search for a fun chocolate recipe ended as a mini voyage into one of my favourite cuisines; Mexican!

I was looking for some ideas for a recipe that made use of what I already had in the cupboard and I specifically wanted to use some dark chocolate that’s been looking at me for a few weeks now.  Before I knew it, I was reading about mole and beginning to feel inspired.  In Central America, a mole is a thick, often spicy sauce made with numerous ingredients that can include chillies and dark chocolate.  There seemed to be a handful of variations and each of them sounded delightful.  Being a nacho fiend, I was beginning to see a serious dipping opportunity.

Having made the decision to use only what I had in the cupboards and fridge, the mole I made included minced beef.  Mole is especially popular because of its complex flavours and satisfying kick.  I couldn’t wait to experiment with it.  What ensued was an attack on my cupboards as the ingredient list grew and grew.  As always, I’m conscious that the recipe I’m sharing with you today is not necessarily a traditional mole, but one that I came up with over the course of a very hot afternoon.  With that in mind, some of the ingredients may alarm you, but trust me when I say, the taste is not disappointing!  I managed to surprise myself and I hope this recipe surprises you too.

This is one recipe that I’ll be making for years to come and I suspect that I’ll be trying other moles using chicken, pork and all kinds of chilies.  The sauce itself is more like a chilli con carne in consistency and I’m not saying that it can compete with an authentic Oaxacan mole.  It is however, fun to make, delicious and open to all kinds of adaptions.  Get ready then, for something different, something that I wasn’t expecting.  Is it a chocolate recipe?  Well, not exactly, but I hope you love it as much as I do!

1 and a half tablespoons peanut butter

I began by browning the beef mince with plenty of black pepper in a little olive oil and then setting it aside.

Next, I gently toasted the coriander seeds in a dry pan until they began to release their flavour.  I added them to a container with every ingredient except for the beef, Chipotles, kidney beans, chocolate and sea salt.  Using a handblender, I made a puree and then heated it in a heavy based pot for about twenty minutes on a low heat.  During this time, I added the Chipotles and the water they’d been soaking in, the kidney beans and all of the beef.  I also grated the dark chocolate into the mole and stirred it occasionally so that the sauce didn’t stick.  I removed the Chipotles when the sauce was cooked.

Once the mole was thick, I tasted it and seasoned it with sea salt.  I wanted to use the mole as a dip, so I didn’t add too much salt- my tortillas are already salted.  This mole is not very spicy, but you could add more chilies if you want a real kick.  This has just enough fire to make it fun.  Let me know if you make it.  I’d love to hear what you think! 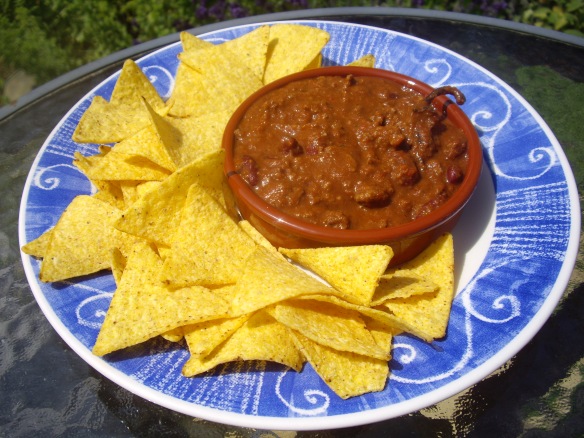